Champions East End Lions will go head to head with their bitter rivals Mighty Blackpool in the  second leg and final game of this year`s premier league on Sunday (kick-off 7pm), having won the first leg fixture. 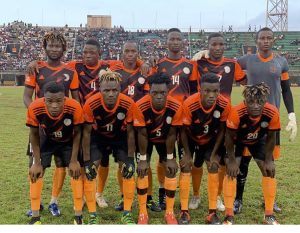 “It’s an important match though they`ve won the league; Kamara said.  He continued: “They will have a lot of confidence as they don’t have the problems they had before when the league started and they are yet to taste defeat in the league;”

John Keister has never lifted the Sierra Leone Premier prestigious trophy and knows a win for his side will serve as big boost of winning the title.Captain of East End Lions Gibrilla Woobay said:

“He (John Keister) knows how good the young boys are and, if the team are not up to his standards or the standards of East End Lions, he will certainly let you know; Woobay Lament.

“This is a decisive match for us to keep our unbeaten run in the league and as captain I want to be part of that history, adding the fans and the technical team also want to part of that celebration and we`re mentally and physically prepared for Sunday`s showdown”.